You are here: Home / retention

The Gig Economy Group talks with Jay Leisner, President of  compensation planning and direct selling advisory company Sylvina Consulting. Part of our exploration of the future of direct selling, Leisner explains the role of residual value in differentiating the direct-selling business from emerging gig options that may attract distributors. Leisner also co-produces the Direct Selling Edge Conference in Salt Lake City this July, as well as other cities around the U.S. 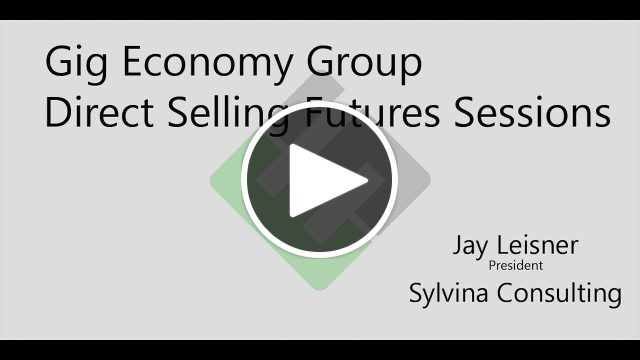 Direct selling is challenging work, but the distributors who achieve early success do build long-term businesses, often as a sideline to a day job. The emerging gig economy presents direct selling companies a rare opportunity to claim more revenue across markets traditionally dominated by retail. As workers become more mobile, many are opting to mix gigs instead of dedicating themselves to one job from 9 to 5. In this mobile and values-centric environment, in-home sales and personal networks can connect virtually any product or service to a market.

The first step for a direct selling company is to win and keep a distributor. A new enrollee’s initial success can create a large network of personal relationships that convert into sales revenue. When their first sale converts within 14 days of enrollment, during the “Golden Two Weeks,” a new distributor is likely to stay with the network for an average of 72 months. That six-year commitment substantially improves the direct selling company’s revenue. Direct selling training company ServiceQuest estimates a 10 percent increase in retention grows revenue by 49 percent over 10 years.

Younger workers also tend to start seeking alternative employment if they don’t make an immediate connection with the company’s mission while finding sales success. Mobile apps connected to intelligent content and training platforms will be the primary point of customer engagement in retail and direct selling within five years. As much as 50 percent of customer relationship management already takes place in the cloud and market researcher IDC predicts spending on artificial intelligence to deliver personalized customer experience will grow by 46.2 percent CAGR between 2016 and 2021.

The next step in the evolution of one-to-one selling is personalization, the delivery of targeted training to distributors and, in turn, helping them to present exactly the information each customer will respond to with a purchase.

A personalized experience that begins when a distributor enrolls in a direct selling network unlocks early sales success. Using a What’s Next approach to a brand’s sales process, sponsoring distributors working with smart mobile apps can address the recruit daily, even hourly, to keep them taking the steps toward a first sale.

It’s also time to for direct selling to put the attrition issue behind it and point out that success in every business is hard to achieve and grow. Reinforcing the business challenge a new distributor is starting in combination with simple actions a new distributor can take is essential to moving the tentative recruit to confident selling. It’s not necessary to apologize for high attrition rates, the industry can focus instead on making more distributors successful.

Keeping a recruit today is difficult in every industry. Annual churn rates in retail are 53 percent compared to 56 percent in direct sales. Only traditional employment models have an advantage in hiring and even they face higher attrition rates when the economy nears full employment – 26 percent of the U.S. labor force quit their jobs in 2017, up from 20.3 percent in 2010. Moreover, 90 percent of entrepreneurs fail within five years. Success is hard-earned and, regardless of the form the company takes, an entrepreneurial success will never be easy.

At LifeVantage, Gig Economy Group’s first partner app takes the new distributor through a brief series of mission- and policy-establishing video programs then turns to get them to enter their first contacts as part of Day One activities. Then, a What’s Next process kicks in to get the distributor selling instead of finishing their contact entries and resting.

The LifeVantage app suggests actions the distributor can take with each new contact based on selections made in the app about customer interests, from buying health products to joining the network as a distributor. Drawing on a growing library of video programming, the LifeVantage app composes an introductory message to a new contact and attaches the appropriate video to share. Critically, this is not done in the background, rather the distributor can review and change the message and media selected or discard the suggestion.

The distributor’s choices help shape their understanding of LifeVantage’s process, and if they make changes or refuse the suggested content, the Gig Economy Group platform records the results. The platform can mine changes to identify improvements in messaging, so even a brand-new distributor will start to reshape the company’s sales process with improvements if their changes convert more sales. Final decisions about content and messaging rest with sales and marketing management, who are able to deploy budget based on real-world results that change conversion rates.

Contacts become the raw material for a conversation between the new recruit and the company, with activity and conversion data available for both to review. No contact is left untended. The app reminds the new distributor to make an initial outreach and to follow up at each step in the sales process. Customer feedback collected by the distributor also shapes the ongoing content and messaging selections targeted to each prospect, driving personalization from the first interaction.

The first day with a sales tool must result in first actions taken for three to five contacts at a minimum to convert a sale within two weeks.

With a measured sales process, improvements can be rolled in daily to test and revise messaging, sales cadence, and training. The distributor’s experience is one of an intense focus on their process, reinforcing their psychological need to see investment in their potential.

In today’s sales environment, pre-sales activity is vital to closing a new customer. Content management platforms can push the right content, but without feedback gathered from customers by the distributor, it is easy to push a prospect out of their comfort zone. When a customer’s interest level goes down, the distributor is encouraged by the platform to revert to informational engagement, building the prospect’s trust using video and suggested messaging that identifies objections that can be addressed.

Failure to develop and keep a personal connection is one of the seven reasons salespeople don’t close deals. Using the wrong closing strategy, failing to listen, and the representative’s own insecurity also contribute to poor conversion rates. A smart platform that encourages feedback can adjust the suggested closing strategy, prompt the rep to listen and record feedback, as well as build product knowledge and confidence.

Yet it still comes down to making the calls that close the gap between prospect and sale. If the direct selling company does not help the new distributor follow up, providing the right messages and variations that address customer feedback, the rep will not close the deal and, if history is any guide, start looking for their next opportunity – one where they close in the first few weeks.

The proof, however, is in conversion. That requires extensive follow-ups, which many salespeople never have the determination to complete. An app can coach distributors through these steps until they become second nature.

With so many economic activities moving to the “edge of the network,” where people meet and interact with one another in person and through social and other digital channels throughout the day, direct sellers have an enormous opportunity to increase their share of the market. The tools are ready and people are living mobile lives that invite frequent trusted interactions. Is your company ready to move a new enrollee to their first sale in the “Golden Two Weeks?”

See You In San Diego

Gig Economy Group and LifeVantage will be presenting at the upcoming Direct Selling Association 2018 Annual Meeting in San Diego, June 17 through 19. We look forward to meeting you at the event, where our team will be exploring critical questions about the future of direct selling. Schedule a demo or reach out to meet and talk at our suite during the event.

We would also appreciate your joining our blog team for a discussion at the event about the challenges facing the industry. We will be writing about direct-selling in the weeks before DSA 2018 and would like to include your thoughts in our reports. Send email to schedule an interview.